By Andrew of Partisan Cantina

I adore almost all genres of film. I will bore anyone that will listen about film noir, westerns, gangster flicks, French new wave, indie movies, sci-fi, superhero films, and Star Wars (yes, I’m placing the galaxy far, far away in a category all of its own). One genre that I never could quite warm to was horror movies. I suspect this was because of poor choices in initial viewing; that plus the fact that I am a world-renowned scaredy-cat. I go faint and squeamish at the sight of all that blood. I go weak at the knees at the sound of a drill warming up. With trusted online companions such as Michael and Kalie though, I gradually realised that I was missing out on the nuances of the genre with my blanket ban. I decided that I was going to go on a journey this summer through the thrills and spills of the horror section. END_OF_DOCUMENT_TOKEN_TO_BE_REPLACED

Over a year ago, when I started Just Dread-full, I wrote an extensive piece about a film I’d seen recently that had more or less captivated me.  The film – a low budget, atypical, but indisputably creepy horror flick – was called It Follows, and Michael and I saw the film four times in theaters when it came out.  There were myriad elements of this film that made it exceptional – its deeper characters, its unique treatment of setting and theme, its distinctly unsettling, creepy ambiance – but I couldn’t pinpoint exactly what it was, about this film that made me want to see it over, and over, and over again.  Unsurprisingly, I purchased the film, and one December eve not so long ago, when I needed to take a break from course work, I watched it again.  And it occurred to me, after re-processing one of my all-time favorites, that It Follows, more than your typical horror movie, deals, both directly and symbolically, with our near-universal and immanent fear of death’s imminence, its inescapable closeness and the insidious fact that it could consume us, any time, without warning.  Don’t get me wrong: most horror movies use the possibility of death as a vehicle for frightening us.  But It Follows does so in ways that are careful, intentional, and cut to the core of our fear that just as the devil chases down rock n’ roll stars (at least, according to some of their lyrics) death is always following us, snapping at our Achilles tendon in hopes that we’ll bleed out completely and wink out from life on this earth.  And wouldn’t that be terrible.  But that is the beauty and terror of a film that is modest, subtle and independent, but remarkably genre bending and genre defining. END_OF_DOCUMENT_TOKEN_TO_BE_REPLACED

I entered Don’t Breathe with mixed expectations.  On the one hand, one website called it one of the scariest movies in two decades.  But, it seems, every horror movie can find a website or critic to make a similar claim about it lately.   In fact, I feel as if I’ve naively prepared myself up for a mind-blowing classic over and over again, only to be let down by some critic’s one-sentence profession of adoration.  And the premise of Don’t Breathe, while certainly original, appeared to have the makings of a thriller more than a horror movie.  As it turns out, many of my preconceived notions were correct.  Don’t Breathe does, for most of the movie, remind one an awfully lot of a thriller, and it’s only scary insofar as you can refrain from shaking your head too vehemently at the main characters, who, it might be argued, are asking for what they get.  My thoughts?  It is what it is.  The premise was inherently hard to execute successfully, and I was never truly scared while I was watching it.  I consider it important to see every horror film that comes out in theaters (since I consider horror blogging my non-professional profession) but if you’re not so adamant, you might be able to skip this one without missing out on anything substantial. END_OF_DOCUMENT_TOKEN_TO_BE_REPLACED 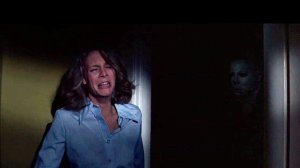 In the spirit of Halloween, I’ve decided to list and explain my 10 favorite horror movies of all time.  I claim no authority with this list; I’m not a film critic.  These explanations are only rankings and scribblings by a sincere fan of the genre.  Disagree?  I’d love to hear about it. END_OF_DOCUMENT_TOKEN_TO_BE_REPLACED

We’ve all been attracted to someone without the ability to explain the attraction’s origin. You know that person you used to work with who you just couldn’t stop thinking about? A person you met at a party who allured you? Sometimes we’re just drawn to people without knowing why. Like, sure, the person is attractive, but what is it about this particular person that is so enticing? I think we’ve all been there: we’ve fallen victim to the unexplained crush. Well, It Follows is my inexplicable horror movie crush. When It Follows came to the theaters, my boyfriend, Michael, and I saw the movie four times. Michael doesn’t feel the same affection for horror that I do, but even he was gripped by the film. It’s such a delicate, subtle little film that’s doing so many things, but four times? Why did we see it four times? What is it about It Follows that makes it such fantastic cinema? I’m writing this piece to figure out what it is I love so much about this movie. END_OF_DOCUMENT_TOKEN_TO_BE_REPLACED