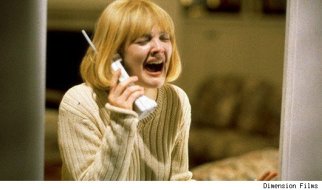 One of my favorite quotes from Paulo Coelho’s The Alchemist (which is one of my all-time favorite books) goes like this: “One is loved because one is loved.  No reason is needed for loving.”  Coelho’s words are often wise – this quote is just one example – but they’re probably meant, in this case, to encapsulate human relationships.  No matter: they can easily be applied to art, cinema, music, etc.  One can offer much in-depth critical analysis of a piece of art, but in the end we “only have to let that soft animal of [our] body love what it loves” as Mary Oliver says in her poem, “Wild Geese.”  Criticism, commentary, and speculation are all ancillary relatives of that fundamentally satisfying, sometimes calm and refreshing, sometimes frenzied and excited feeling that wells up inside a person when she finds what she loves – in literature or the fine arts, cinema or music, or, to be genre specific….in horror.

Michael and I watched Scream the other night, and I’ve integrated part of the film into a lesson plan on writing reviews with a group of students, so I know how many online reviews of Scream there are, and I’m not hubristic enough to think I could add much fresh insight to two decades of commentary.  As such, I decided to keep this post really, really simple.  Even if, according to Coelho, I don’t need a reason to love the film I love, I’m going to tell you, in list format, why I do.  If you’ve seen it before but it’s been awhile, perhaps you’ll revisit it.  If you missed this 90’s cornerstone of violence and postmodernity, let me try to tell you why I think you simply must give it a watch.  I have no set number limit to adhere to, and I’m listing my reasons in no specific order (I’m not much in the mood for organizing and planning right now).  So here’s my on-a-whim explanation of my love affair with West Craven’s Scream.

1. Pure, simple nostalgia:  I was 12 when this film came out, but my parents had no qualms with letting me watch R-rated movies.  I think I first saw the film in theaters with my dad, in fact.  I don’t remember that instance in detail, but I vaguely remember being young enough to think that the high school students in Scream were old, that the lives they were living were bloodier, more chaotic versions of the life I had in front of me.  Parents are often hesitant to expose pre-teens to cinema like this.  I think that’s a valid reservation, but I don’t think the exposure did me any harm.  I was young enough to love the film for the sake of the film itself, for the pure entertainment value and the ostensible “coolness” of the characters, and that’s part of the reason I love the film today: I still see it, partially, through a 12-year-old’s eyes.

2.  David Arquette, as Deputy Dewey: David Arquette is hilarious in this movie.  He adds ample heart and humor to a film that manages to be consistently funny while remaining morbid and macabre.  As Tatum’s older brother, Dewey is a slightly awkward, lovable pushover and town sheriff who exhibits compassion and feigned bravado, but also admirable courage when it’s needed.

3.  David Arquette with Courtney Cox: So, I may have just spent ten minutes sifting through google images of this former real-life couple.  While they remain friendly, David and Courtney’s marriage didn’t work out.  Still, their chemistry is abundantly apparent in the film.   Courtney Cox plays Gail Weathers, the cut-throat, vicious reporter who seems, initially, more interested in wealth and fame than she does in basic human decency and the well-being of those around her.  Because she’s a confident, gorgeous shark, she plays a comic opposite to the unassuming Dewey, who she flirts with partially to get closer to the scandal she’s investigating, but partially because (we sense) she really likes him.  It’s honestly no wonder they were together for some time off-screen; their chemistry sizzles lovably, noticeably, and humorously in this film.

4.  A Canonical Beginning: This all-star, quintessentially 90’s cast also boasts the presence of a young, talented Drew Barrymore who plays Casey Becker in the film’s opening scene.  I do not want to inundate this review with spoilers, but, suffice it to say, the opening scene in Scream stands as its own entity, its own cinematic short or work of art in a larger, scary, self-aware, sometimes laugh-out-loud picture.  The opening scene is clever – creepy phone banter about Casey’s favorite scary movie between her and a deep-voiced, unnamed caller famously defines the scene – intense, and shocking, and establishes a mood that is altered and manipulated throughout the rest of the film.  (I’m not being more concrete about my meaning here because my dad tells me I spoil the end of movies too much on this site.  Thanks, dad ;))

5. A Righteous Soundtrack: Okay, so I don’t know the soundtrack intimately, but there’s a chillingly slow re-make of Blue Oyster Cult’s Don’t Fear the Reaper during a pre-intimate scene between Neve Campbell and Skeet Ulrich, and the rest of the movie is spuriously doused with equally unpredictable but appropriate vocal stylings.  You know how some movies just have a mood or a feel?  This movie has a strong mood, a strong feel, one the filmmakers tried dubiously but appreciably to replicate in the sequel, but one that really only scintillates in the original.  And the soundtrack definitely contributes to the rare, indefinable essence that this unique slasher flick conveys.

6. Keen, Salty Self-Awareness:  The movie pokes fun at itself sometimes and is clearly aware of where it sits in the vast pantheon of horror movies, and especially slasher cinema.  Characters frequently discuss horror movies, and during one scene, Tatum (Rose McGowan) compares Sidney’s dramatic past – her mother was violently killed – to a “Wes Carpenter” movie.  It seems she took two alleged horror gurus, Halloween’s John Carpenter and the film’s own director, Wes Craven, and unknowingly combined them, a subtle gibe at the limitations of their stardom and influence.  And as the movie is adopting (though slightly inverting) typical horror film norms, Randy (Jamie Kennedy) is watching Friday the 13th with friends, explaining the “rules” of horror films.  In one classic line, one not-to-be-named character looks menacingly at another character, says, “We all go a little mad sometimes,” and directly attributes the quote to Anthony Perkins’s character in psycho, before committing a new set of mad deeds.

7. Snarky, smart-mouthed, fun characters: I’ve zeroed in on a specific few characters in this post, but suffice it to say, the quick, witty back-and-forth between the film’s teenage characters makes the movie hip (for its time, at least), funny and entertaining.  It’s not that all of the characters are completely likable; one or two may act, at times, like total idiots.  But they’re rounded and interesting and have worthwhile things to say.  They’re not clichés, and some of them are highly sympathetic.

8. An exploration of contemporary insanity: “Madness,” in its variegated forms, manifests throughout the film, but is most thoroughly depicted at the end of the movie. In case you haven’t seen the film (though you well may have) I won’t give away the ending, but I will say this: it’s a developed, thoughtful depiction of insanity.  I remember my dad (who’s showing up a lot in this post) saying he didn’t like the ending as much as he liked the rest of the film.  For a long time, I agreed with him.  If I still do, I can at least appreciate what the writer and director are trying to do in the ending of Scream, even if it’s a bit “over the top.”  We see how sick and depraved humanity can be, how that sickness shows itself, and how a horror movie villain devises a plan.  The film concludes with a lot of blood, some complementary drool, a glimpse into the minds of certain characters, and an exploration of what the film’s living “good guys” are really made of.

I could probably go on in this post: The former “Fonz” plays an excellent Principal Skinner, and when high school students are running through halls shouting, wearing the killer’s uniform, our sheer human stupidity (or at the very least, our culture of insensitivity) is rather obviously parodied and critiqued.  And of course, you can’t not like lovably dorky Jamie Kennedy in this movie.

Especially after writing this post, I realize how much Scream sits in my heart.  Really.  It sounds cheesy, awkward, and incongruous to say about a horror film with an ample body count, but it was, not my first, but one of my earliest horror films.  The characters are magnetic and memorable, and the movie’s “vibe” manages to be dark and portentous without being hopeless, young and energetic while grotesque and only semi-dismal.  To me, the film is, well, yes, a little disturbing, but still, in its own way, exciting and fresh, after 20 years.  So, in commemoration of the 20-year anniversary of this classic (which will officially occur on December 20th), Scream, I salute you!

4 thoughts on “20 Years of Gore and Glory: Why I Love Scream”