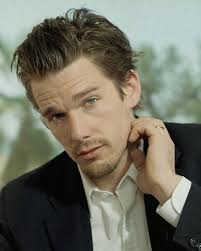 For Christmas, I was unexpectedly gifted with the book The Haunted City, presented by Jason Blum.  Because I’ve seen myriad Blumhouse movies – and have been moderately thrilled to terrified by most of them – I was unquestionably excited by this present.  Indeed, the book received much praise, which it splashed across its beginning pages.  My excitement intensified.  And I stumbled upon a story by Ethan Hawke.  We all know him.  He seems like a likable enough guy, and certainly a good actor.  So I thought to myself: I wonder how Hawke does horror?  And I had to find out.  As it turns out, he does pretty well, but he left me wanting more.

The story 1987 starts with a young man who realizes, to his great chagrin, that he’s gay.  So he ditches the drama club and joins the SAE fraternity.  Hawk tells the story with quick, lucid prose.  His words and sentences flow into one another well; he definitely has his own distinct writing style, and his main character evokes a distinct, slightly dark, wry voice.

The narrator relates a time when he took LSD with his friend, Jake, in Madison Square Garden.  Drugs are part of what make this story macabre, and they manipulate the reader’s sense of reality.  If a good horror story takes you from the mundane every-day to a bizarre and seemingly impenetrable otherworld, then Hawke satisfies this criterion.  He does it mostly with hallucinogenic drugs, which could be seen as a cop-out, but I don’t think it is.  Any vehicle for distorting the narrator’s reality and blurring the border between that which we know is real and that which we only surmise is real is an apt start for horror, whether it’s done through disbelief, subtle shifts in perception, mental illness, or drugs.  My only critique of Hawke’s work would be that the drugs don’t obfuscate our sense of reality as much as I would have liked; for the most part, the narrator – and the reader – seem completely aware of which phenomena are hallucinations brought on by drugs, and which aren’t, with one key exception.  There could be more room for conjecture in the story, to further amplify the mystery.

Regardless, Hawke’s narrator and his friend Jason undergo considerable brutality while they’re on drugs.  Hawke is not subtle about the fact that the perpetrator commits his acts because he suspects that the narrator and Jake are gay –which makes us wonder if Jake, the fraternity jock, actually is gay, since we know the narrator is.  The story is a great harkening back to the vehement homophobia that defined the 80’s, especially in the wake of AIDS, and serves as a startling reminder that these mentalities are far from obsolete in contemporary culture.  While the story seems most appropriately situated in the 80’s, it’s not hard to imagine – especially after what we find out about the perpetrator – that these acts could happen in present day, a telling reminder of how far our society still has to go to eliminate hate crime and achieve some semblance of equality.

Hawke transported me to his narrator’s warped reality well, but I found I wanted more of that world.  My initial reaction was to suggest that he add more twists to the ending, but I don’t think that’s necessarily what I’m looking for.  It seems too easy to critique an ending, and not every story has a stark, mind-blowing twist.  I think I would have liked Hawke to develop the rising action and the climax, and to take us more deeply into the terrifying side of the LSD world he creates.  He certainly does well depicting how and LSD trip can go from beautiful and serene to hellish contingent upon the events that happen during the trip.  I wanted Hawke to drag me more deeply into that hell, to more confusingly blur the boundaries between that which is real and that which is a product of the narrator’s imagination.

This seems like a strange critique for a short story.  From what I infer, brevity is all the rage in literature today, and from a standpoint of someone who’s studied the craft (though, admittedly, hesitated to dabble in it herself), it’s always more masterful to tell a good short story concisely.  Perhaps that’s what Hawke was aiming for.  And it’s a credit to him that I found myself thirsting for more.  The story was certainly unsettling, but it’s in a Blumehouse Anthology.  I wanted Hawke to take us more deeply into this twisted otherworld.  His story was scary, but I wanted it to be even scarier.

The Art Or Endeavour Of Being Lucid In A World We Live In... Secrets Of The Psychics... Energy, Universe, Futurism, Film, Empowerment...Digital Abstract Art Rendering...

Reporting News That No Other Paper Can Cover.